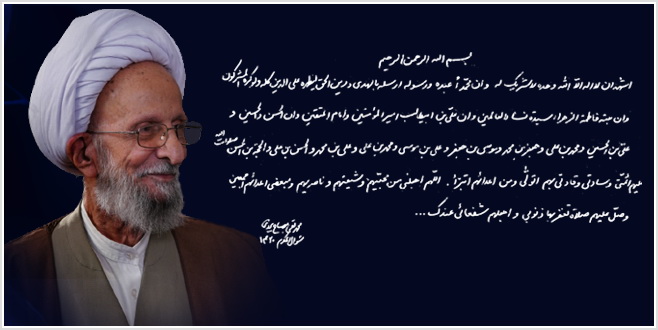 In the Name of Allah, the Beneficent the Most Merciful

I bear witness that there is no god but Allah and that Mohammad is His servant and Messenger, whom He sent for the guidance of mankind and conveyed him the true religion. He will make his religion dominate all ideologies even if the polytheists detest it. And I bear witness that his daughter, Fatimah is the Mistress of the Women of the Worlds; and that Ali ibn Abi Talib is the Commander of the Faithful (Amir al-Mu'minin) and the leader of the God-fearing ones.  And that Hasan, Hussein, Ali ibn al-Hussein, Mohammad ibn Ali, Ja'far ibn Mohammad, Musa ibn Jafar, Ali ibn Musa, Mohammad ibn Ali, Ali ibn Mohammad, Hasan ibn Ali, and Hujjat ibn al-Hasan (Allah's blessings be upon them all) are my Imams and masters and leaders. I befriend them and turn away from their enemies.  O Allah! Place me among their lovers, followers, and adherents and resurrect us with them!

And indeed death is a truth. "And verily the Hour (of Resurrection) is coming: There is no doubt therein and that verily Allah will raise up whoever is within the graves."  And I bear witness that all which was brought by the Prophet (pbuh) was the truth in which there is no doubt; and that the Quran and the Progeny of the Prophet (pbut) are the two "Weighty Things".  Whoever adheres to them will be saved and whoever disobeys them will go astray. I seek refuge in Allah Almighty.

This is the last will of a sinful servant who hopes for his Lord's pardon and mercy which surpasses His wrath; and who hopes for the intercession of his Infallible Leaders (Allah's mercy be upon them all).  From Mohammad Taqi Yazdi to my beloved son, Ali.

I advise him to what Allah, His messengers, and His intimate friends advised people.  I advise him to piety before Allah and reliance upon Him.  Know with certainty that salvation is attained only through the worship and obedience of Allah.  Felicity is not attained except by relying on Him and resorting to His intimate friends.  Keep in mind that one of the most virtuous matters which Allah has commanded us to is seeking knowledge, acting upon it, and teaching it to others.

I want you to keep in mind that at such a time like ours, seeking knowledge of Allah and what He has revealed is similar to jihad in the way of Allah.  Rather, it is the most virtuous form of jihad. For indeed, the threat of ignorance is greater upon Islam and Muslims than the threat of the enemies.  And that defending Islam and dispelling doubts regarding its principles and rulings are among the most virtuous deeds that please Allah Almighty. I pray to Allah that he (Ali) and his brother succeed in this matter, while seeking Allah's blessings and grace.

I advise him to be sincere in action, strive in it, and do away with lethargy.  And I advise him to perform tahajjud (midnight prayers), recite the Quran, and resort to the great men of Allah, especially His Eminence Imam Hussain (as) and the Remnant of Allah on His earth (may Allah hasten his reappearance).  I advise Ali to do goodness toward his mother, for Heaven lies beneath the feet of mothers.

I advise Ali to do goodness toward his brother, my beloved Mojtaba, and also toward his sister.  I also advise him to do goodness toward his brothers in Islam,, relatives, and neighbors.  I ask him to venerate his teachers, especially those from whom he has acquired the knowledge of Tawhid and morals. I ask him to seek forgiveness for me, hoping that this will prove beneficial for himself too.  I ask Allah Almighty to grant him divine assistance and aid, for He is the Lord of mighty grace and immense bounty, and is the Most Merciful of the mercifuls.  And I advise him to be constantly cognizant of Allah, much contemplation, and abundant thankfulness.  I advise him to struggle against the inner self and passions, and show abstinence toward the tempoal world, the material life, position, and rule.

And I advise him to contentment and to abandon covetousness toward what is in the hands of people; to rely on Allah and not to place hope in anyone other than Him.  Do not fear anything except the disobedience of Allah; and in regard to Allah, do not fear the scorn of any blamer.  I advise him to know that he will never go astray with the certain knowledge that reaches him from Allah, and that he will never reach an outcome through what Allah has deemed wrong.

And I advise him to be patient and satisfied with what has been destined by Allah, for that is indeed the steadiest of courses.  And I advise him to exert his effort for a single cause, that being the satisfaction of Allah Almighty; and to know that the servant who places his trust in Allah, Allah is greater than to leave him up to himself or up to His other servants.

Then I advise him to cut off from all else and turn toward Allah and to become intimate with Him; and to purify his love for Allah and disengage his heart for the remembrance of Allah and supplication. I ask Allah to grant him success in these matters, by the right of Mohammad and his Pure Household, and to also make the light of my eyes, Mujtaba, successful in all these affairs too.

As for my wife, children, brothers, colleagues, and all those to whom I am indebted, I ask them to pardon me and to pray to the Compassionate Lord to forgive me. I would like my wife to live in our current house for the rest of her life, unless she herself prefers otherwise.  I transfer all the house furniture and my personal belongings to her.

And when I answer the call of my Lord Blessed and Exalted be He, I would like you to recite the blessed surah of Tabarak besides my grave for forty nights.

And although I myself was not able to hold gatherings of tawassul in my house, if possible, I would like a gathering of tawassul to be held every now and then so that the blessed names of the Master of Martyrs and the Imam of the Age (may Allah hasten his reappearance) are kept alive in the house.

And I would also like part of the one-third of my estate to be spent for feeding the poor, a feast for the neighbors, and keeping ties with relatives. Remember to give charity to the poor especially during the burial.